After a summer break, the Network’s series of NED Talks resumed on 22 September with a presentation by Ruth McNeil. Ruth is a Fellow of the MRS and after a career in MR is now, amongst other roles, Chair of the Friends’ Committee of the Heath Robinson Museum in her home town of Pinner, northwest London.

William Heath Robinson (1872-1944) was an artist, social humorist and cartoonist best known for his drawings of imaginary contraptions – or, as Ruth put it, “whimsically elaborate machines to achieve simple objectives”. During the First World War he produced a number of cartoons gently mocking the situation. Ruth illustrated her talk with several of these and later drawings.

Robinson was also a prolific author, similarly offering a humorous take on social developments of the day; Ruth’s talk included images of books with titles such as How to Live in a Flat, How to Be a Perfect Husband and How to Be a Motorist. Later in life, when already well known for his contraptions, he was the illustrator for The Incredible Adventures of Professor Branestawm.

Ruth’s interest in his life and works was stimulated when West House, a substantial villa in Pinner, was restored in 2010 and subsequently chosen to host the Heath Robinson Museum in 2016. This was, she assured us, the first entirely new museum in London for 40 years. We saw photos of the house in various stages of repair, and of author and broadcaster Michael Rosen opening the museum.

Many examples of Heath Robinson’s art are on display at the museum and Ruth encouraged us to visit if ever we were in the area. And in such an event, she also exhorted us to “help an old friend [by completing] the Visitor Survey”. You can take the woman out of research, but…

The next NED Talk (and the final one of the year) will be entitled ‘Shouting in the Evenings… a peek behind the curtain of (amateur) theatre’ and will be given by Danny Wain on Wednesday 10 November. Invitations will be sent out shortly. 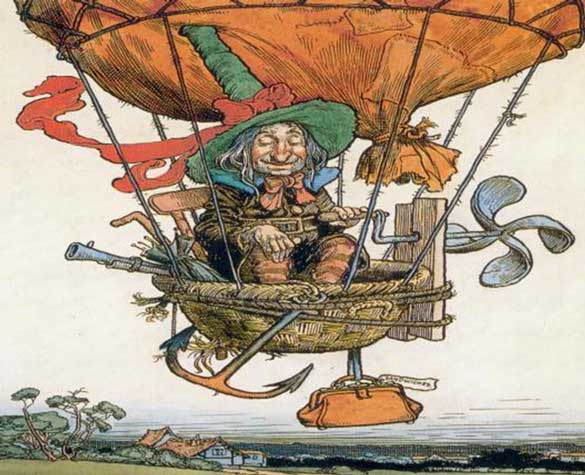