Network meets in person for AGM and Christmas drinks

Last year the Network decided to ignore the example of the cabinet by obeying the rules and holding its Christmas party online. This year we were back to a live event and some 30 members gathered in Westminster for an AGM followed by Christmas drinks.

As we had two years ago, we met at the offices of Kantar Profiles – a wonderful space almost opposite the Houses of Parliament, where we were the guests of Jon Puleston and his colleagues. We are enormously grateful to them for their hospitality.

At the AGM, Adam Phillips reported on the year’s activities and Gill Wareing on finances. Then Jane Bain outlined next year’s social programme, Frank Winter summarised the progress on the oral history programme and finally Adam sought and obtained the re-election of the Steering Group.

The formal business was concluded in about 50 minutes but the social event continued for an hour or more. It was a smaller gathering than usual – recent news on the virus was not encouraging and numbers were further dented by torrential downpours and the cancellation of some rail services. Nonetheless, those who did make it clearly enjoyed it and deemed the event a success.

Pictures of the event can be viewed in the gallery https://www.research-network.org.uk/gallery/christmas-party/ 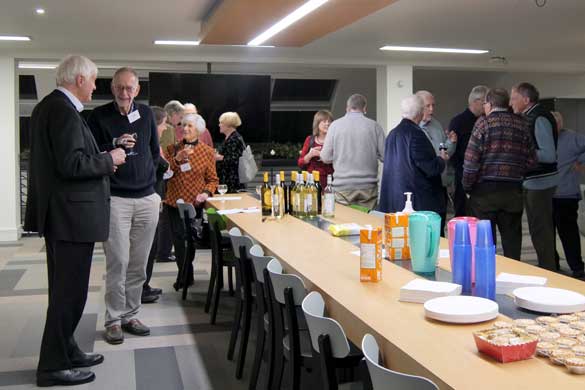