Sounds of the Sixties and beyond

Our first NED talk of 2021 took place on Tuesday 19th January, when Neil McPhee took to the microphone on the subject: ‘Musicology as a Socio-Cultural Journey… A Personal Timeline’. Neil has had a deep interest in music since at least the age of eight and has been a performer for much of his teenage and adult life.

His musical interests, it soon transpired, spanned a vast range of genres. Blues was an early interest but his talk covered in some depth acts from the fields of skiffle, rock’n’roll, folk and 1960s pop. He had, he told us, put his performing career on hold in the 1970s and 80s, during which time family and a career in market research seemed to demand much of his attention. But in recent years he has been performing again, and he has clearly never lost his interest in discovering new artists.

The talk included some fascinating visual images and musical extracts and was followed by a lively discussion with the audience. The Steering Group is very grateful to Neil for the work and preparation that he put into he event, and for starting the year in such an exciting and enjoyable way.

At the end of the meeting, Jane Bain reminded us all that we are hoping to continue this programme of talks, but that it does depend on our own members to provide the material. We have covered a huge range of topics, from mountain climbing via wine and recipe translation to owls, and most recently to two very different aspects of musical performance. Do please get in touch with a member of the Steering Group if you think you may have a topic of interest. We’d love to hear from you… 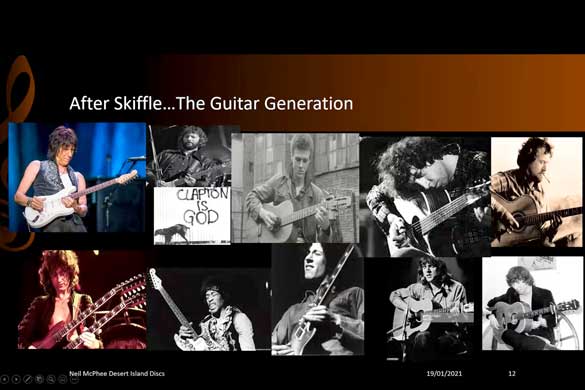