What historical research data tells us about recent European referenda

“If you want people to think you are funny, don’t tell them you are a comedian tell them a joke.”

At the third annual event of the Archive of Market and Social Research Sir John Curtice, Professor of Politics at the University of Strathclyde and psephologist in residence at the BBC, lived up to this advice.

He demonstrated the worth of historical research data not with grand theory and principles but with a surgical compare and contrast of the two referenda about membership of the European Union from 1975 and 2016.

He first of all reminded us that the Leave-Remain divisions in 2016 were characterised by age, education level, views on immigration and the divide between what David Goodhart has described as the ‘somewheres’ and the ‘anywheres’. The referendum itself was driven by divisions in the Conservative party.

In 1975 the referendum was driven by divisions in Harold Wilson’s Labour Party. The result then was a more convincing 67-33 in favour of staying in the EU (Common Market as it was then known).

Digging into the Archive (as well as research held in the UK data archive at Essex University) Curtice showed the stark difference between 1975 and 2016 from polling studies about voting intention. Conservative supporters were 69-23 in favour of membership, Liberal supporters were 60-33 in favour and Labour supporters 40-51 against membership. (Of course no UKIP or Brexit party in those days.)

The archive also reveals the methodological debate surrounding the wording of the referendum question. In 2016 the Electoral Commission decided the final wording. In 1975 the wording was checked out by NOP Research on behalf of the Daily Mail. How much did it matter whether ‘yes’ or ‘no’ came first? Did the government’s endorsement make a difference?

Looking at the polls leading up to the referendum shows that in 1975 opinion shifted gradually but significantly in favour of staying in the EU in line with the Government’s endorsement. In 2016 the run of polls shows that the balance for and against barely shifted whatever the government was saying; more evidence of the long term reduction in deference to authority?

Curtice also demonstrated how the archive data shows the contrast in voting patterns. In 1975 age and education level made very little difference in support for the EU. Immigration was hardly an issue and far more people were concerned about the effect the EU might have on the level of prices, particularly food prices. (The context for this, of course, was the high level of inflation in the 1970s which meant that this was much higher on the political agenda.) The big voting divide was in social class with ABs and C1s being more in favour; not such a clear divide in the 2016 referendum.

Curtice left us to ponder how David Cameron’s team might have handled the campaign differently if they had learned carefully from the rich and revealing data held in the archive.
The AMSR now holds 5,000 documents with over 70,000 pages digitally available on line. Covering not just politics but social issues, attitudes to food and health, views on the environment and much more. The narrative of history is available and ready to help in today’s more complicated world. 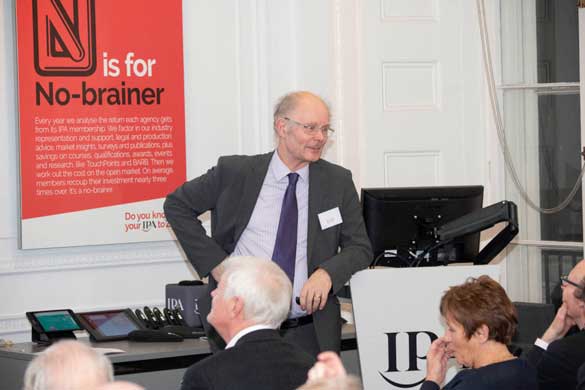